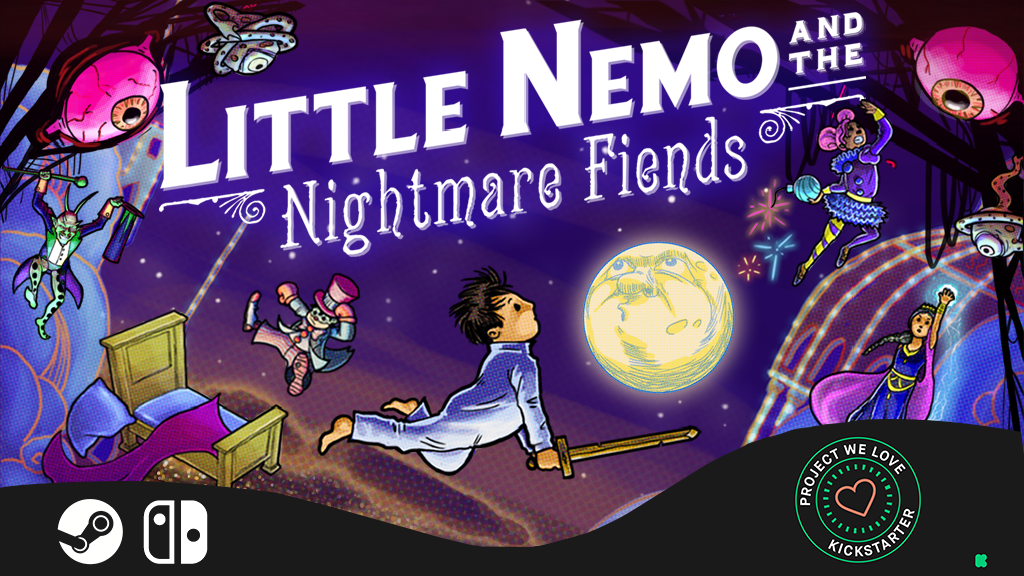 It's been a wild few months, so we've been slow on this feature. Things at Nemo HQ have been busy on the game and off - we've had a few team members move, characters have been torn down and rebuilt as more responsive versions, and we've done lots of art and animation.

We're happy to say that we'll be sharing our first public demo of the game at the GDEX Game Expo in Columbus, Ohio during the first weekend of October. I'll also be doing a talk on the game's animation and how you have to rework traditional "principles of animation" for use in games!

In preparation for all of that, we're working on our GDEX demo, which will be a small portion of the Night Sky world, including the Moon boss fight - which is why he's going to be the topic of today's Sunday Funnies episode!

The Man in the Moon

This isn't the first time we've covered the Moon in these updates. If you recall, we took a look at him in our Night Sky update, where we looked at some of the comics that inspired our version of the character and how the artwork for the Moon reflects his appearances in the comics.

In this comic, the moon is not an enemy, but rather an agent of Slumberland that, along with a yellow creature named Lunatix (we're assuming the "luna" pun here is fully intentional), is sent by King Morpheus to retrieve Nemo so he can be the Princess's playmate. Things go awry, as they often do, when Nemo's bed lifts him into the air, crumbles under him, then takes him to Lunatix, who tells him that they should fly to Slumberland inside the Man in the Moon's mouth! Rather than taking his chances on whether or not the Moon will eat him, he runs away screaming until he wakes up on his bedroom floor (that's what happens when you have too many donuts before bed!)

This is not the Man in the Moon's first appearance in the comics though. He would instead appear the week before on November, 26, 1905 during the episode where a giant turkey lifts Nemo's house off the ground, landing Nemo in a lake of cranberry sauce in a celery forest.

There in the center frame is the Man in the Moon with a bemused look on his face, staring at the strange turkey kaiju stomping through Nemo's town. This is a role that he would have throughout Winsor McCay's run of Little Nemo comics - as almost an avatar for the reader, providing emotional context for the action in McCay's surreal fantasy. If McCay wanted to highlight something wondrous or tell the audience when to laugh (much like the laugh tracks used in television sitcoms), the moon could be your guide.

Audiences in 1905 would have been more than familiar with the idea of a Man in the Moon. References to the Man in the Moon date back to early Christian lore, including references in Germanic and Roman legends.

More recently in McCay's time was Georges Méliès' 1902 special effects film Le Voyage dans la Lune (A Trip to the Moon), which was in turn inspired by the works of Jules Verne. Méliès' film was a huge success in its time and saw many exhibitions across the United States, so McCay's audience was primed for such a character to be included in something like Little Nemo.

We've had lots of fun developing the Man in the Moon so far! He's been a lot of fun to animate as he's a giant expressive face with really nice hatching effects. McCay always drew the character with a circular silhouette, which has given us an interesting constraint for how to move the face around and show different expressions.

That's it for today's Sunday Funnies! We'll continue to share info on this character as we continue to develop him - tell us what you think in the comments!


See you in the funny papers!

We're doing something a bit different for our 20th episode. In the first half, we discuss various aspects of our upcoming show booth at GDEX: Our display banner to attract attendees to the booth, our demo stations, and more. We thought this discussion might give some insight into the kinds of decisions that need to be made to make an attractive booth at any convention that indie developers plan to showcase at, which is an important part of the indie dev life.

In the second half, we run down our Kanban board (set up in a project planning application called AirTable) to see what tasks currently remain in the demo, creative solutions to solve those problems and what features may or may not make the cut in order to get our demo done within a reasonable deadline.

'But what's a Kanban board?' I hear some of you asking! It's a tool used in all kinds of project planning that anyone who does any kind of software development is very familiar with. It's essentially a white board with post it notes, and each note is every part of your project that needs to be completed. In the context of a video game, that's all art assets, all programming and design tasks, sound effects and much more. A Kanban board helps you to see all your tasks in front of you and categorize them so you know what tasks have been completed, which are currently being worked on by your developers, and what tasks still need to be started or possibly removed in order to get the work done on time. They are extremely useful, and we hope this episode gives you all some insight in how they're used in game development and project management.

That's all for this week. Until next time Dreamers!

It's been a bit hasn't it? For those not following our discord, some of the audio for the recording was corrupted and unrecoverable. But we're back this week and we're exploring a bit of a hodgepodge of topics!

For those who haven't heard, Little Nemo & The Nightmare Fiends is officially heading to GDEX in Ohio this October! We've started laying out the ground floor for our show demo, and while our intent was to chat about our first go at adding sound effects to the game, we chatted a bit about constructing the level, implementing the new parallax camera that Chris has been working on, and the copyright status of later Little Nemo comics! As a result, this episode is a bit more off the cuff and candid, and I'm curious to hear your thoughts on it!

Also find out our thoughts on the infamous Wilhelm scream and who we'd like to see in a theoretical public domain Smash Bros. style game. This episode really has a bit of everything!

Hi everyone! It’s time for the Saturday night dev stream! I’m planning on going live at around 9pm edt at https://twitch.tv/pxlplz. I have some Peony stuff to work on still and I’m going to try get her climbing on the ceiling tonight. We’ll see if we get there.

Hope to see you there tonight!

Quick heads up; I accidentally recorded from the wrong microphone. I edited the audio to the best of my ability, so you should be able to hear me ok but it won't be nearly as clear as it usually is.

That out of the way, this week we chat about automaps! Games these days conveniently draw out your path as you go, and Little Nemo and the Nightmare Fiends will be no exception! But how exactly should we handle it? What can be gleaned by other games that use the feature? And will we be able to include it in our earliest playable builds? Find out in the latest episode!

We of course discuss our favorite games, going back to the old well of Shantae, Castlevania: Symphony of the Night and of course, Hollow Knight. For reference for the episode, here is a link to the full map of Hollow Knight. (Spoilers for Hollow Knight obviously)